Posted by Nilima Mohite on November 28, 2010
Hi Good day ppl!
Walk among nature is possible in a city like Mumbai too. My sister, me and a friend joined a group 'Walk the Mumbai trees', who select a locality & walk around it giving information about the trees present there. We did 3such walks.

There are a lot of trees to mention, hence will split the posts in parts, so as not to bore & cause system overload ;)

There are a lot of interesting things to know about the trees you see everyday.

Some of the terms used:
Indigenous- Native or from this country. If trees are from your own country, they grow better, are adaptable to the conditions here. Hence such trees should be grown more.
Deciduous- The leaves fall off in winter.
Evergreen- The leaves are self-renewing.
Some trees have a story connected to them, have added that in short under 'Story' 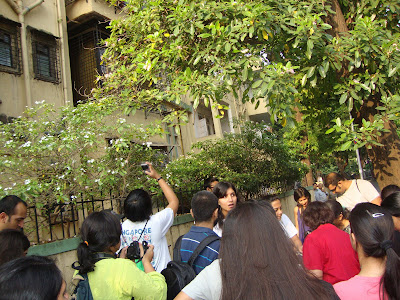 The girls in the center white t-shirts are Lahar & Satwiki who conduct these walks. This pic is from the Bandra walk on 24th Oct 2010.

False Ashoka: Also called Asopalav. It is an indigenous tree.It is not the real Ashoka tree, hence the name False Ashoka. It grows to 30feet. There are 2types, one grows tapering to the top, the other spreads in a huge canopy. Both are shown in the pics. They act as sound barriers & hence planted around residential areas. 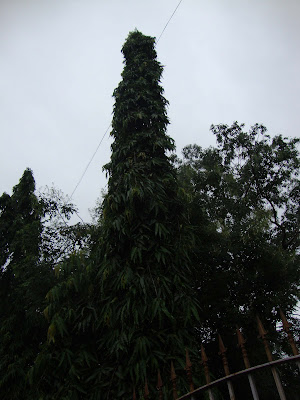 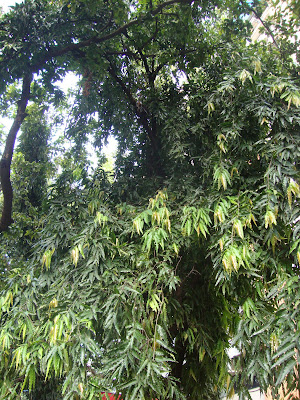 Arjun: Like a flying fox. Its an indigenous & deciduous tree. It is found around rivers. Its leaves have medicinal value & used for skin ailments and pimples. The leaves are used for silkworm farming. The wood is used for building boats. 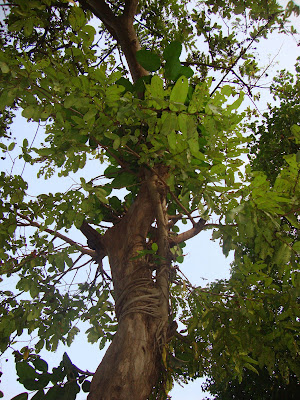 It has a pepal tree strangling the Arjun tree. 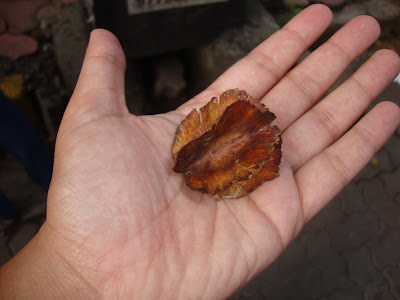 Thats the fruit of the Arjun tree. Loved the texture.

Bhendi: It is an indigenous tree and an evergreen tree. Its leaves are like the pepal (heart shaped) & thin. It has an umbrella shaped huge canopy. It has yellow & murron flowers which give out a dye. It has high medicinal value. Its leaves are used to cover food as it keeps it fresh. Its wood is hard & is used to make musical instrument like 'thavil'. The 'Bhendi Bazar' is named since there are a lot of these Bhendi trees in that locality. Other locations like 'Chinchpokli', 'Tardev',... are named according to the trees in that area.

Story- There is a story behind this tree. There was once a princess who was very beautiful & at the same time proud & vain about her beauty. One day she was going in her chariot & was busy admiring herself. A brahmin came and stopped the chariot asking for food. The princess was so engrossed that she didnt pay attention to him, so he gave her a curse & transformed into tree. the king on hearing this sought out the brahmin, asked for his forgiveness and requested him to return his daughter. The brahmin said the curse was irreversible, but what he could do was bless the tree to bear the flower in the colour of the dress the princess was wearing, that is yellow. :) Hence the flowers are yellow in colour ;) 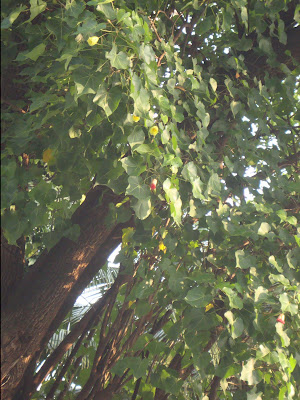 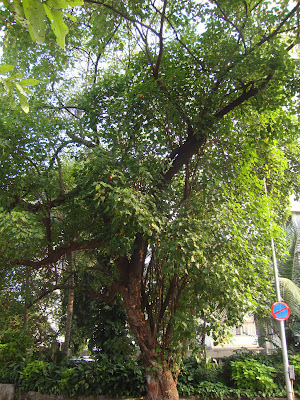 Fish tail Palm: Its an indigenous tree. Its from the palm variety & gets its name since its leaves are like a Fish tail. Its speciality is: It flowers only once in its lifetime. But its flowers, fruits last a very long time. Hence on most trees you will see its fresh flowers, fruits & dried up fruits all together.The fibre is used to make ropes. 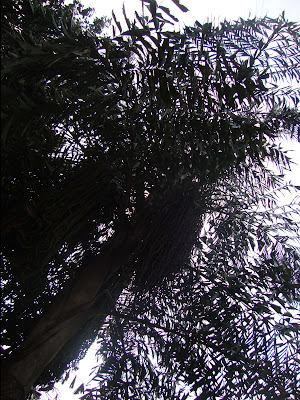 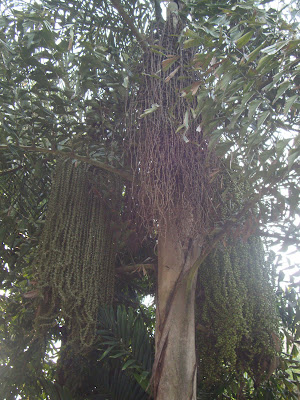 On the left side you can see the flowers, on the left the fruits & in the center are the fruits which have dried up.

Gulmohar: Its not an indigenous tree. Its a native of Madagascar. It has broad leaves which are divided into tiny leaflets. It has a large canopy. Its pods(fruits) give out a dye. It has a smooth bark. It has orange flowers which look beautiful when they flower. Since its not a native tree of India, its roots dont go deep into the earth & it uproots easily in rainy season. These are used as avenue trees to decorate lanes. 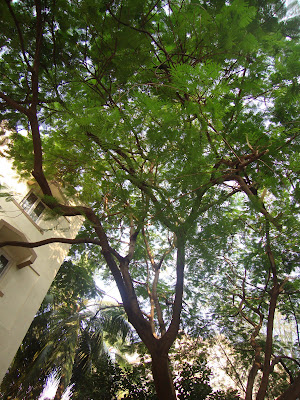 Rain Tree- It is not a native tree. It has a large canopy & round leaves. Its trunk is huge & wood is used as fuel. It has white-pink powdery flowers. It flowers in March to June, but this year you see them flowering in Nov-Dec too. The leaves droop down in evening & its said they got the name cause the leaves droop down when there are dark clouds indicating rain. The tree has a lot of moisture around its base but its not because of the tree, but due the insects which live in them. 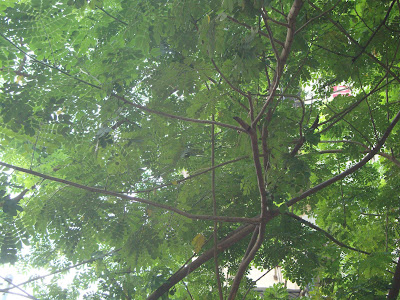 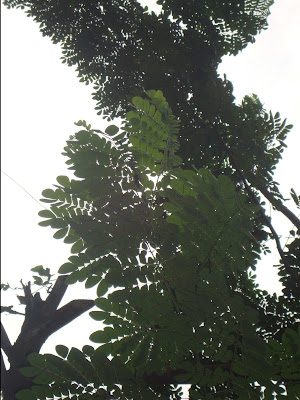 Jackfruit: Its a native tree-indigenous & evergreen.It has leaves with a leathery texture. The leaves are in the shape of a cup, pointing upwards. Its wood is used for making furniture. Also used to make musical instruments. The bark is red underneath. The fruit is sweet & is a variety of dishes,pickles are made from it. Read more here
Story- When the Portuguese arrived in Calicut,India, saw this fruit & asked for its name. The people told them 'Chaka' in Malayalam, which was anglicized as 'Jaca'. 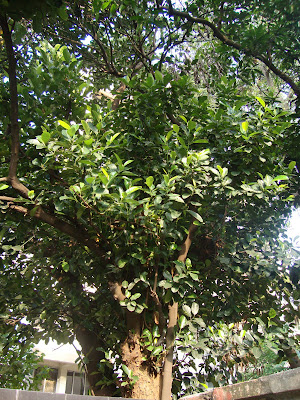 Jamun: Its an indigenous tree. Its a fast growing tree. Its wood is strong & water resistant. It flowers in the summer season. It has a tasty fruit which has many medicinal values. Its bark & fruit give out a dye. You can identify it by crushing the leaves. 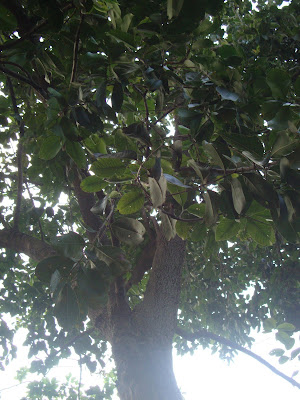 Kadamb: Its a deciduous tree. It has longitudinal leaves. Its flower is round,strong & has a sweet fragrance. It has a lot of medicinal value. It has many religious stories associated with it. Read all these here 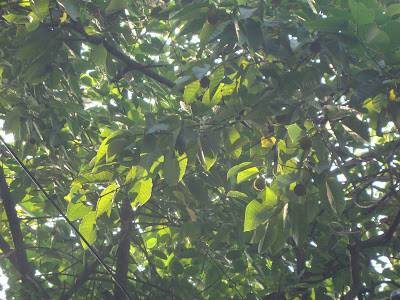 Karanj-Its an indigenous & deciduous tree. Its fruit is in the shape of a karanji (semi circle). It has pink,white,purple flowers. Its trunk has white spots on it. Most of these tree have leaves eaten by worms,insects and has never healthy. Its a common tree. 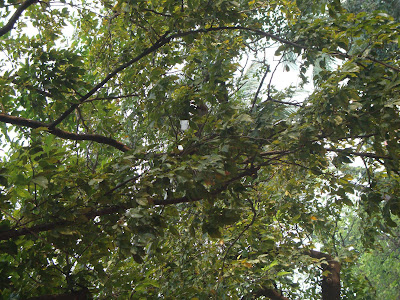 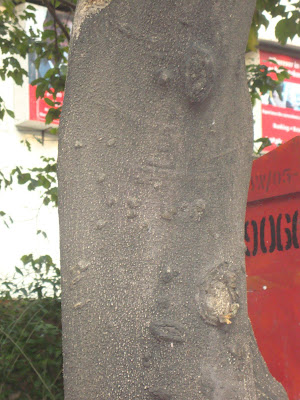 Pink Trumpet-Its not a native tree. It has beautiful pink flowers shaped like a trumpet.They grow in clusters. The leaves are in groups of five, with 3longer at the end & 2 shorter on each side. This tree looks beautiful when its in full bloom & its a huge tree. 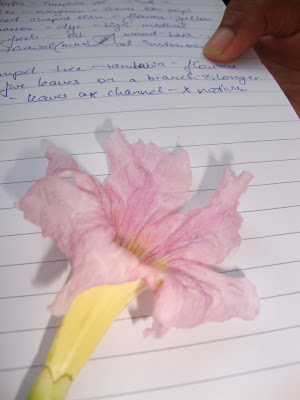 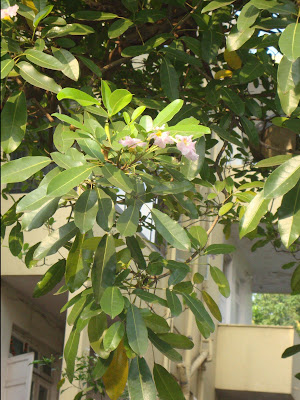 Thankfully we could identify 5-6 common trees. Thanks to my parents, school, girl guide camps, beautiful colony & my grandparents who introduced us to nature & made us vigilant about the things around you.

Please join in such Activities to know more about the things surrounding you.
Visit the FB page of the 'Walk the Mumbai Trees' to know about the next walk.