Today visited the Haji Ali dargah for the first time even after being born & brought up in Mumbai :). Its a famous landmark of Mumbai, a must see for all tourist & welcome for all religions.
The Dargah Sharief is built on a tiny islet located 500 meters from the coast, in the middle of Worli Bay, in the vicinity of Worli.

I had thought we will have to consider the high tide,low tide to reach but when we reached at 2:30pm, it was a little crowded but accessible. 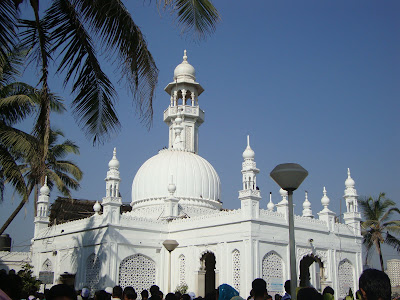 The story behind this dargah is:

The Haji Ali Dargah was constructed in 1431 in memory of a rich Muslim merchant, Sayyed Peer Haji Ali Shah Bukhari (R.A.), who gave up all his worldly possessions before making a pilgrimage to Mecca.He had travelled all around the world & settled in Mumbai.
once the Saint saw a poor woman crying on the road, holding an empty vessel. He asked her what the problem was. She sobbed that her husband would thrash her since she had stumbled and accidentally spilled the oil she was carrying. He asked her to take him to the spot where she lost the oil. There, he jabbed a finger into the soil and the oil gushed out. The overjoyed woman filled up the vessel and went home.But he had a recurring dream that he had injured Earth by his act. Full of remorse, he soon fell ill and directed his followers to cast the coffin carrying his body into the Arabian Sea, once he died. Haji Ali left this world during his journey to Mecca and miraculously the casket carrying his body, floated back to these shores, getting stuck in the string of rocky islets just off the shore of Worli. Thus, the Dargah was constructed there. 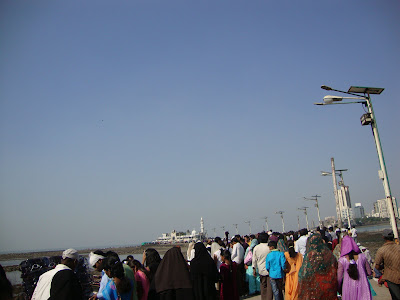 The causeway joining the shore & the dargah. They say the waters submerge this causeway during monsoons. So other times all days its open from morning till 10pm at night. Fortunately for us it was not much crowded. 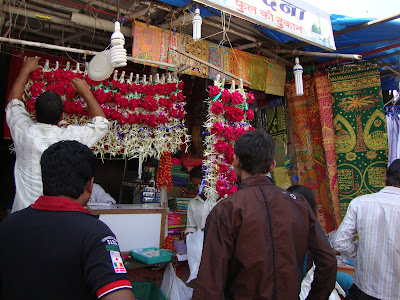 Near the shore at the start of the bridge there are these flower, shawl,sweets shops to offer to the Saint they call Sahib baba. 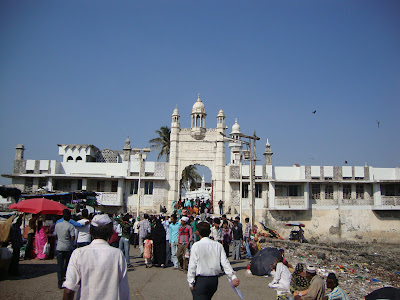 A short walk & you are there. The causeway is 0.62mile or nearly a km long. 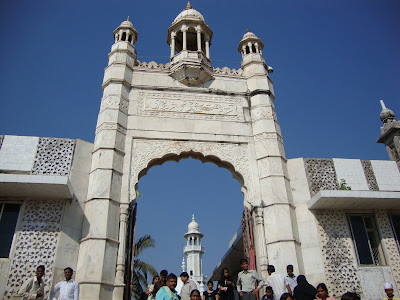 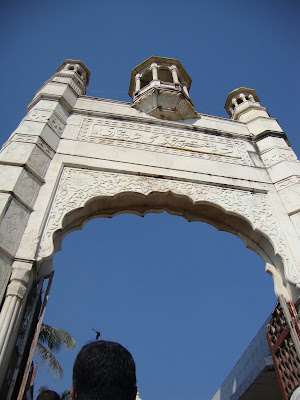 The edifice is a brilliant specimen of the Indo-Islamic style of architecture.

The dargah!
The surrounding structures are in bad condition. The renovation work is going on around it. The thing we liked was there was hustle,pushing around happening, maybe because we landed up on a odd day. There were entire huge families & groups of people having family lunches :) 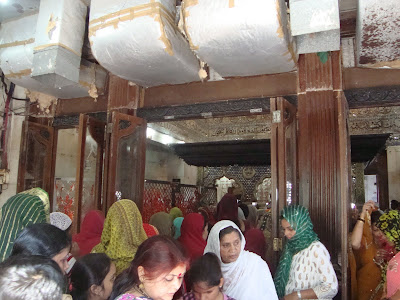 The entrance & prayer halls for male & females are different. So I have pics from the ladies side of the dargah. This is the prayer hall outside the main tomb. Wanted to sit down for sometime but it was crowded & much noisy for a quick meditation session :) 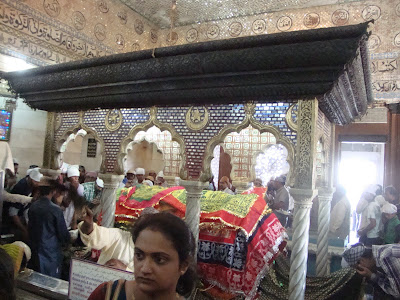 The Saints tomb. People from all religions flock here & are welcomed. Its beautifully constructed with glass work. It has a powerful energy flow too. No wonder people are mesmerized & keep coming back. 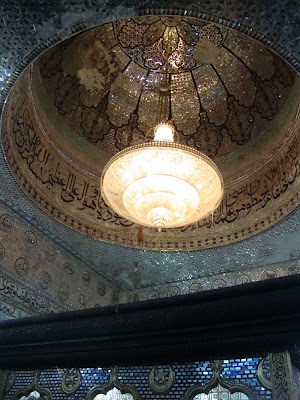 As usual I looked up to check the ceiling & was awestruck. The main attention grabbing thing was the Zhumbar or chandelier. Sadly parts of the ceiling's work has falling off. Hope its restored perfectly. 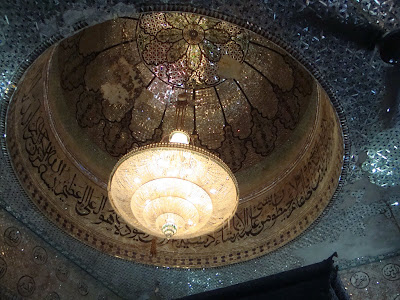 A better view. Awesome piece. Is it as old as the dargha? The dargha is 500 year old. :0 The glass work is arranged in a kaleidoscopic pattern, which spells the names of Allah in 99 different forms. 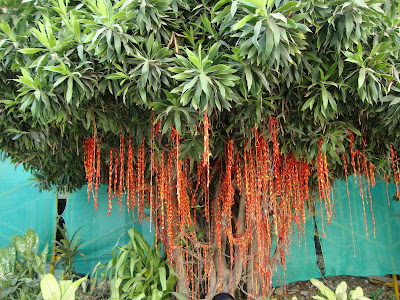 The other thing famous about this place is the Mannat tree or dargha. It is said that whatever you wish for comes true by tying a red thread around this tree or the frames around the saints tomb. This has been much popularised by bollywood movies. 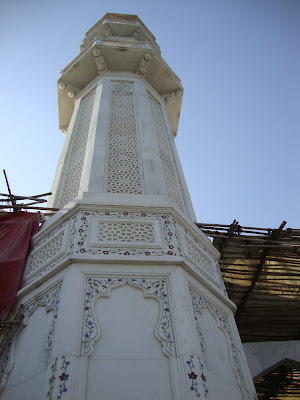 The single minaret behind the dargha is beautifully carved. 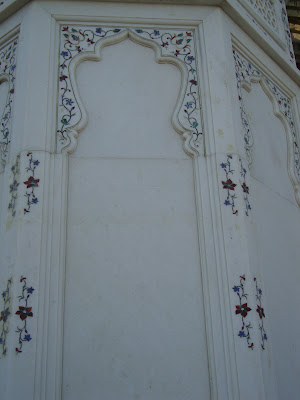 Check the floral inlay work. The renovation work has been done on this, cause it looks quite new. But its nice. 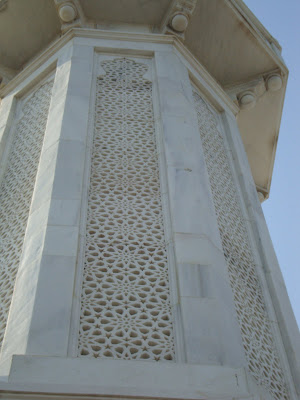 As usual I like the lattice work & chajja along with the inlay. All in all a beautiful structure. 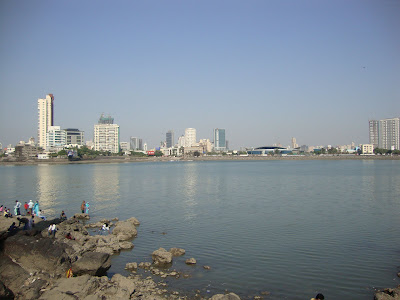 The view from the behind of the dargha. The Nehru Planetarium,Royal Western Turf Club is visible. 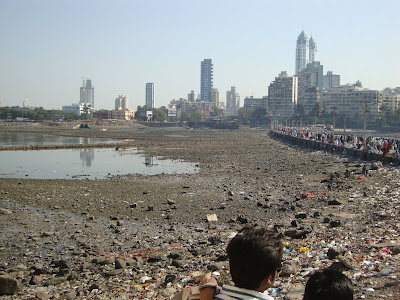 On our way back. It just took us 1hour for the entire visit & that too it happened peacefully. Gr8 I like this place. 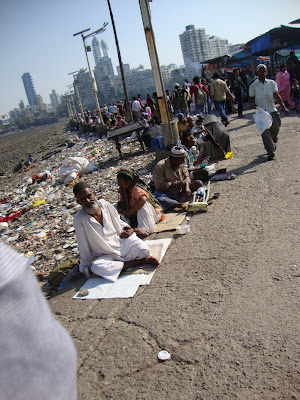 The other thing sadly famous here are the beggars on the causeway. Today there were not many, but it seems they beg for money in dollars & some have all types of currencies. The joke is you can ask for 1000rupess change from them & they will give it to you ! :D 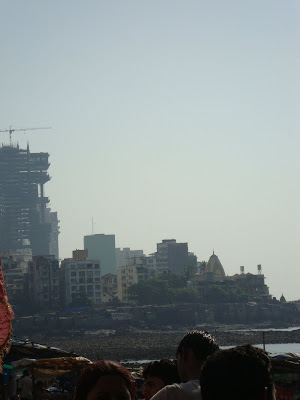 The Mahalakshmi is visible from here, another landmark of Mumbai.

A superb,stressfree outing on a Sunday & ticking off one item on my to-do list. Apart from the garbage thrown around its a beautiful, peaceful religious place. 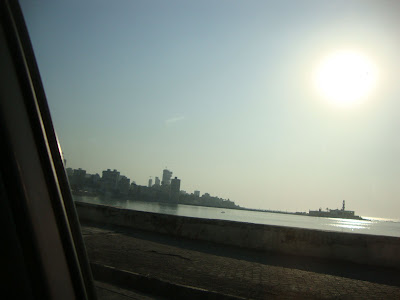 If you havent visited it, please do. Iam sure you will like it :)

Bye.TC.
Have a gr8, productive week ahead.