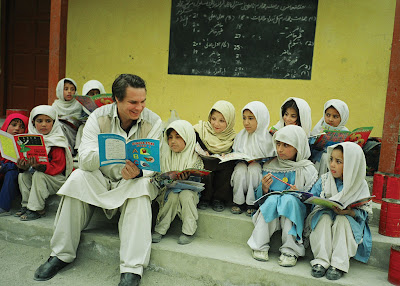 Suggested by a friend few months ago, started reading it a few weeks ago. To tell you in 1line would be: Its beautiful & the story told through it is Real, makes it heart captivating.

The story is about Greg Mortenson, a mountaineer who was in 1993 attempting to climb Pakistan’s K2, the world’s second highest mountain. He failed & was injured. The village which helped him heal & get ready to go back home was Korphe. While he was staying he came to know more about the peoples kindness as well as their difficulties. He tried his best to help them. Before leaving he asked the village head Haji Ali, what is the one thing I can do for your village? The chief replied, they didnt have a proper school for their children so could he build a school for them. Greg didnt know how he would do it, but promised to build Korphe a school. After facing a lot of difficulties in collecting funds for the school, he was able to build 1school.

He didn't stop at 1 school though. Till date he has built around 50 schools around Pakistan & continues to build more. His book & motto is: One Man’s Mission to Promote Peace . . . One School at a Time.

He was no millionaire to be able to do such a deed. He strived hard to collect funds & find sponsors. Eventually his donors, family,friends, supporters have formed an organisation called: Central Asia Institute, which works towards educating children, empowering women, introducing new means of livelihood for the men & lot of other welfare activities.

He says to fight the rise of terrorism in areas like Pakistan, Afghanistan, ... is not bomb those places, or blame all Muslims to be terrorists but give the people & the children balanced education. Education will help them form views about themselves, country, freedom & also give them opportunities to build their lives instead of turning to terrorists training camps which promise the children and their families finance & aid all their lives.

As Mother Theresa said: I will never attend an anti-war rally; if you have a peace rally, invite me. So its foolish to try to FIGHT terrorism, instead help BRING PEACE.

This book makes you think: What am I doing meaningful in Life???

Here is a chance to make a meaningful change: Read the book, visit the site: Three cups of Tea , be a part of : Pennies for Peace, blog,talk, spread the message. The more people come to know about this mission, the more change can be expected to Make a World a Better Place for All.

Going to read the next one too : Stones into Schools

Please read the book, you will get it at most of the booksellers. Let us know your views.

May all the children in the world receive & use Education for thier betterment, Inshallah!